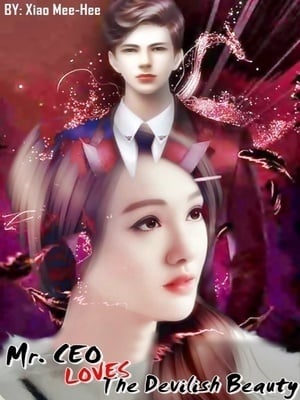 "I hope my wife liked the arrangements... for the wedding night."

His low husky voice made her heart skip a beat. She tried to walk away from his reach but to her dismay, he held her wrist in his hand. She licked her lips.

He pulled her wrist and her body crashed into his broad chest.

Trying to calm her breathing, Xu Mey looked up at his face to say something but couldn’ do it.

Ye Jie was pleased with her transfixed countenance. He lowered his face towards her. Inadvertently, Xu Mey took a step back.

They continued with a step back and a step ahead until Xu Mey’ legs felt the edge of the bed behind.

There was a haughty smirk playing on Ye Jie’ lips. He lowered his face again towards her. Xu Mey bent her body backwards but she lost her footing making both of them fall on the comfy bed.

As she laid on her back with Ye Jie’ body pressing on her own, gazing at his handsome face inches away from her own with his piercing gaze penetrating her soul, she realized she had no ability to push him away.

She wanted to get him off her body. She wanted to stay far away from him. But she couldn’ do it. His face was so close that his breath tingled her.

When his soft thin lips touched her cherry plump ones, her mind was electrified. He softly nibbled on her lower lip, sucking it slowly. The kiss was not urgent or passionate. It was just a simple kiss which displayed a gentle but sincere feeling.

What do you do when your family abandons you? Do you start to hide?

Xu Mey wasn’ the one to hide. The only thing she hid from the world was her real self. Seemingly, a timid girl was terrifying inside but only a few knew about it.

She was running for revenge. For every wound that she received, she had a burning desire to pay back ten folds.

Ye Jie was heartbroken. He had a perfect life for the world but only he knew what he was trying to hide even from himself.

At first, Xu Mey was just his interest. A girl who popped up in his life out of nowhere and yet wreaked havoc.

But he soon realized that she had walls built around her heart keeping the world at bay.

Losing love once felt enough to him but with a certain someone’ appearance, a lot is intended to bring a change.

What will happen when she’ alter his idea of love?

Will he be able to shatter the thick walls around her heart?

Life shattered her into pieces. Will his love be able to pick up those broken pieces?