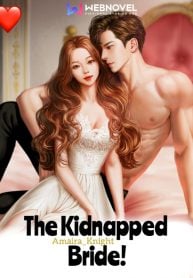 “Who the hell are you!? What are you doing in my room?” Jennifer shouted when she saw the man sneaking inside her room out of nowhere, just a few minutes before the wedding.

Gun was pointed in her direction, straight into her heart with horror evident on her stunned face.

A smirk landed on the man's face when he answered back, “You have two options, Ms. Jennifer, either you die at this point or…escape with me!”

Jennifer Taylor, freshly graduated, was ready to be thrown into an unhappy marriage with the Mafia King of their state, Lucas Smith.

Everyone concluded that the man fell for her beauty and mind but nothing was true. No matter how much others tried to convince her but her heart never melted.

On the wedding day, she was all ready to execute her plan but suddenly, a mysterious man appeared inside her room, threatening to kill her.

Who is he? She is clueless but all she can do is to follow his lead and the adventure he is giving her, to safeguard herself from those who are waiting to take undue advantage out of her.

But later in her life, she discovers that whom she considered a threat all along, was her helping hand who tagged along for a very long period.

Moreover, with this stranger, she walks on the path of unveiling all the truths that were hidden deep in the grave.

The man came near her, with a towel wrapped around his abdomen. But her eyes flew to his abs, those perfect figured abs…

A dangerous smirk passed by his lips when he asked, “Like what you see, Ms. Taylor?”

Realization drew over her when he caught her lingering gaze on his upper naked body. “What?! No! And don't you have any kind of shame? You're standing in front of an unmarried girl!”

“So what? I heard that girls get attracted to men who have good physique. You know it isn't difficult to accept that you like it..” he was still shamelessly provoking her.

“You!! I'm stuck with a shameless pervert for sure! Go and wear something before I hit you with my hands!” Jennifer was burning in the pit of anger but at the same time, her cheeks burned red.

At last, as per her wish, he wore the bathrobe and turned around to come to main point, “What do you wish to ask?”

“Tell me who changed my bridal dress?” Jennifer asked with a straight face, but Javier didn't look shocked. “Do you see anyone else in this house? If your pretty eyes can, let me know.”

“Except you, obviously no one else,” Jennifer answered in a hurry, but then her eyes turned wide when she realized what she just spoke in front of him.

Javier laughed at her innocent expressions, “Bingo! There you have your answer. Who would have changed your clothes except me?”