Job Change For Everyone: My Job Can Infinitely Evolve 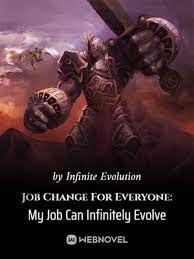 Job Change For Everyone: My Job Can Infinitely Evolve

“The world underwent a mutation that year. The game world appeared in reality and various disasters started to ravage the world.

To resist all of this, everyone had to plan for their job choice, manically level up, and strive to become stronger.

There were mages, warriors, knights, and summoners—over 100 different kinds of jobs. This was a job that a person would be stuck with his entire life. Thus, everyone chose cautiously. Out of this dazzling array of jobs, Moses picked Knight—which had the most average ability value—to be his job.

At the same time, he also awakened the Hundredfold Increase System.

“”Ding! Detected that the host learned Shielding. The skill has become Absolute Defense after the hundredfold increase!””

“”Ding! Detected that the host learned Defensive Domain. The skill has become No Damage Domain after the hundredfold increase!””

At the same time, Moses also discovered that his job could evolve infinitely!

“”Ding! Detected that the host’s Knight job has met the conditions for a hundredfold increase. The job has become Great Knight… Paladin… Impregnable Fortress!”